The Mahabharata is an Indian epic about a royal family feud. It dates from the early Vedic period (c. 1500-500 BCE). In it two sets of competing cousins—the Kaurava brothers and the Paandava brothers vie for control of the Kuru-Panchala region.

Duryodhana, oldest of the Kaurava brothers and son of the blind king, is dishonoured and mocked on a visit to the palace of his older cousin and crown prince, the virtuous Yudishthira. But Yudishthira had a “fatal flaw”—a love of dice. At the suggestion of his uncle Shakuni, Duryodhana exploits this flaw by inviting the Paandavas and many other royal figures “famed for their love of leisure and gambling” to a social gathering that involved playing dice. At first Yudhishthira said no to playing, claiming gambling was evil and led to misery. But soon he was mocked into playing by Shakuni, a skilled gambler with an evil plan. 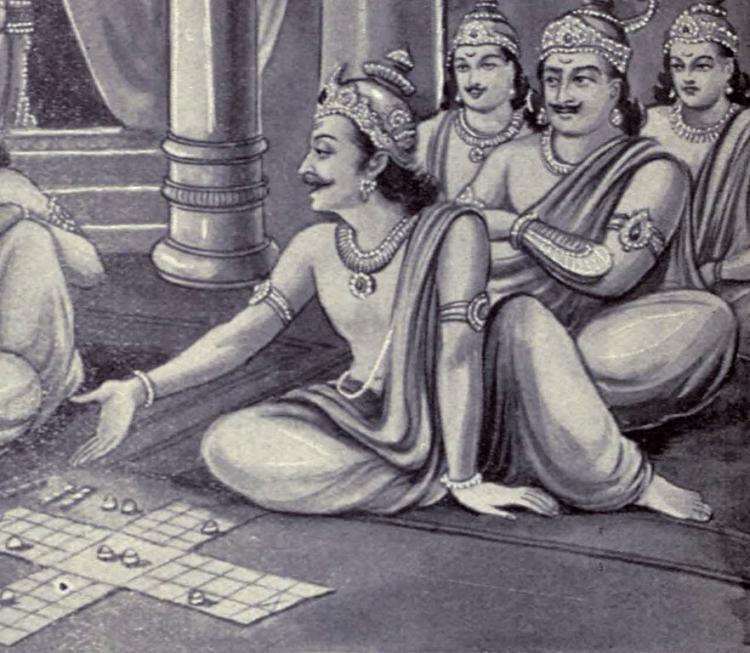 “One by one Yudhisthira put at stake prized jewels ornaments from his treasury, his brocades, vestments, his mineral and precious metal savings; then his livestock, horses, his armies, slaves, servants and courtesans, then his lands, his capital, his cherished palace and the crafty Shakuni with the roll of the dice kept winning them all.… Desperate to win, Yudhishthira gambled away each of his four younger brothers and finally himself. The deceitful Shakuni finally suggested he put at stake his spirited and beautiful wife Draupadi and Yudhisthira fell for the ploy.”

The humiliation of Draupadi forced the blind king to intervene and return to Yudhisthira all that he had lost and to send the Paandavas home with honour.

“It was not long before an enraged Duryodhana forced another wager on the Paandavas. When Yudhisthira lost again to Shakuni, the Paandavas and Draupadi as terms of the wager went into perilous exile for twelve years.”

In the apocalyptic war that followed the Paandavas’ return from exile, nearly everyone is annihilated. However, Yudishthira survives and is declared king.  According to Indian lore, this whole epic ushered in a new deeply flawed era in which great values and noble ideas have disappeared.

read
Is gambling an addiction?
pause & think
Ode to the Dice
read
Gambling through time